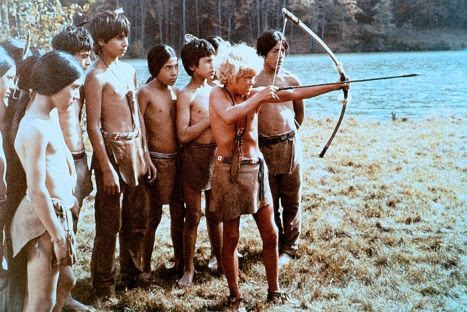 Based on the Anna Jürgen novel, George, the ten year old son of English settlers living in Ohio, in midwestern America of 1850 after the conclusion of the French and Indian Wars, is kidnapped by a native tribe and taken to their village. He is raised by the Iriquois chief who has lost his own son. He is stripped, painted black and held under water, as part of his initiation into the tribe. Renamed "Blauvogel" (Blue Hawk), he spends the next several years being raised by the Indians, who prove to be kind and probably more virtuous than the Europeans from which he came. Eventually, he is returned to his English family, but finds the readjustment difficult, particularly as they do not have the same respect for nature as the American natives.

Youtube link: www.youtube.com/watch?v=0eAKLPS-VDc
Posted by Tom B. at 6:50 AM