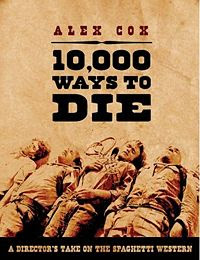 
Some generous British friends of mine sent me Alex Cox's new book “10,000 Ways to Die” in June as it was released in England 3 months before it was made available here in the U.S. On September 1st. I was holding off on purchasing it because the shipping charges alone were almost as much as the book. If I had waited it still would have been well worth the wait. This is one of the best books ever written on the subject. I've seen Cox enough to know and appreciate his insight and humor. In this revised edition of a book he wrote some 40 years-ago as a graduate student at U.C.L.A. He spent quite a lot of time watching some 200 films in preparation of writing this new book, and he gives the reader an exciting ride through the genre. Told from his viewpoint as a director and a fan of the genre you will see some of these films from a different perspective and whether you agree or disagree with the assessment you will come away with an insightful knowledge not touched on by other previous writers. Cox pulls no punches so be forewarned he tackles Corbucci, Eastwood and Leone, Sabata and Sartana. If he doesn't like a film, director, story or character, whatever he'll say so. Alex dislikes comedy Spaghetti's, children, supposedly funny old-timers and cute characters. He covers the major films year by year and also brings up the rest which were released during the same time. This is an essential addition to your library and a fun read at the same time. I don't know when I've enjoyed a book so much and it was the best read of the summer. It's now available through U.S.A. Amazon for under $18.00
Posted by Tom B. at 7:14 AM