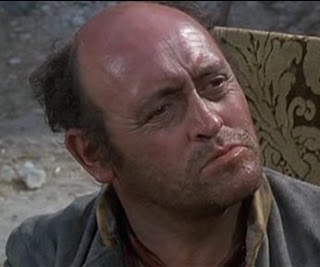 Veteran Spanish actor Victor Israel passed away on Saturday September 19, 2009 in Spain. His funeral was held on Sunday. Born José María Soler Vilanova on June 13, 1929 in Barcelona, Spain. The impish actor with the bad eye which reminded many fans of Jack Elam and Marty Feldman was a mainstay in the Spaghetti western and horror genres for more than three decades. His first Euro-western was in “Savage Guns” (1961) and he continued acting in westerns until his last appearance in “Al este del oeste” (1983). Seldom did he have more than a few lines of dialogue and often he appeared in uncredited roles, but his face was so easily recognizable that you knew him in a heartbeat. One of his best and important roles was as the Confederate sergeant in “The Good, the Bad and the Ugly” (1966). Angel Eyes played by Lee Van Cleef goes to a Confederate field hospital and talks with Israel about Bill Carson and where if captured he might turn up. This scene was cut from the U.S.A. print and most of us never saw the scene until it was inserted in the restored DVD version released several years ago. It's sad to see one of the best of the Spanish character actors leave us as quietly as most viewers were aware of his long career.
Posted by Tom B. at 7:48 AM