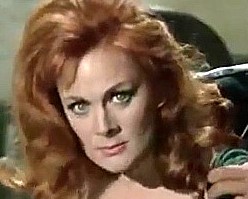 Yvonne Bastien was born in Argentina in 1933, the daughter of a French father and Spanish mother. she appeared in a number of films there between 1945 and 1950 under the name Yvonne de Lys. She then married Héctor Julio Díaz the Transportation Minister under Dictator Juan Domingo Perón before the military coup of 1955. Her husband was imprisoned by the new rulers and died there in 1956. She moved to Spain, married Antonio Roman whom she had had a brief relationship in 1952 when they worked together on the film “Último día”. She then resumed her career as an actress and singer.
Posted by Tom B. at 4:41 PM