With "Trasnochos Classics", there is an acknowledgment of the cinematography of the great Italian director, Sergio Leone "and his genre known as the spaghetti western, which changed the traditional Western of the West to make his own mark that still resonates today, with thousands of followers of this unique genre.

The XV Italian Film Festival May 31 – June 13, 2019, which is being presented in Caracas, also brings this case for moviegoers, a tour of some of the most representative films of Spaghetti Western, a film genre popularized by the screenwriter, producer and director of Italian cinema, Sergio Leone, and who generated an authentic revolution in western cinema as they knew it in the sixties.

Indeed, thanks to the Italian Embassy, ​​the Italian Institute of Culture of Caracas and the Trasnocho Cultural Foundation, under the patronage of the Italian Ministry of Foreign Affairs, together with the films of the festival, a separate chapter is devoted to presenting four of the most emblematic films of Leone, in the Paseo cinemas, that the spectators will be able to enjoy. These are the films: "A Fistful of Dollars" (1964), "For a Few Dollars More" (1965), "The Good, the Bad and the Ugly" (1966) and "Once Upon a Time America" ​​(1984). ).

Leone, made his debut as a filmmaker in 1961 and, several years later, began, with "A Fistful of Dollars", a series of violent and somewhat ferocious westerns, shot with singular strength, which gave him great popularity and broke records at the box office. It made his mark: the Italian director dirtied the figure of the cowboy, in the most literal sense of the expression, snatching immunity from the dirt and dust of the road, populating his chin with a slovenly beard and distorting his impeccable dentures based on chewing tobacco.

But Leone went even further. The Italian director not only affronted the physical appearance of his heroes, but also modified the language they used, neglecting their diction and pronunciation, making it much more coarse and rude. And the same thing happened with the actions and situations they faced, offering a much wilder and more malicious look, closer to what actually happened during the conquest of the Old West.

It is possible to emphasize that legacy, Leone left for posterity two figures who worked with him: Clint Eastwood and Ennio Morricone. The Italian director discovered for the world, the person of Eastwood, an interpretative talent very different from the one that characterized the neat John Wayne, a ragged, dirty, sweaty figure with a challenging look. So much influenced Leone's style in the American actor and filmmaker, that when he received the Oscar for "Unforgiven" (1992), Eastwood, dedicated it in part to the Italian director. On the other hand, the Italian director also showed the world his compatriot Ennio Morricone, one of the great composers of soundtracks who has composed music for some of the biggest productions of American studios.

At the XV Italian Film Festival and the tribute to Sergio Leone, there will be reflection and exchange with the public, since each exhibition of the films will be presided over by a presentation by José Pisano, critic, General Director of Blancica Cinematography and Director of programming Cultural Trasnocho; as well as the intervention of Luigi Sciamanna, actor, director and playwright.

We recommend that you purchase your tickets online, check the schedule and schedules of the films through: www.trasnochocultural.com. For more information visit: www.iiccaracas.esteri.it and ambcaracas.esteri.it. We invite you to follow us through Facebook: Italian Institute of Culture of Caracas, Twitter: @iicdecaracas and @trasnochocult and Instagram @trasnochocult @ iicdecaracas.Thone Trasnocho Cultural box office: (0212) 993.1910. 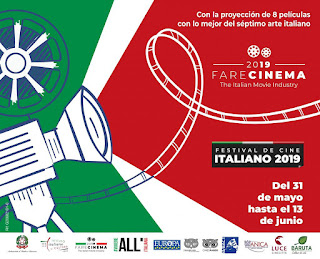