Django: An Iconic, Mud & Blood, Neo-realistic Western that took Spaghetti Westerns to the next level. 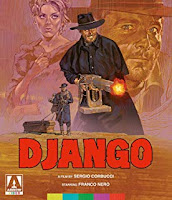 Sergio Corbucci’s iconic Spaghetti Western Django (1966) which made a star out of Franco Nero looks better than ever in a newly restored print.

When one thinks of adaptations of  Akira Kurosawa’s Yojimbo, the name that first comes to mind is Sergio Leone’s A fistful of Dollars. Of course it was the first of the lot and was the most famous ; launching the big screen careers of Clint Eastwood and Sergio Leone and starting the trend of spaghetti westerns. But the true remake of Kurosawa’s classic film was made by another Sergio, Sergio Corbucci in 1966 called Django. Though the film did not take scenes or dialogues directly from the film as A Fistful of Dollars did, the film replicated the socio-political dimensions and the psychological depth of the characters from the original. A fistful of Dollars had sidestepped these aspects for a new kind of stylish, operatic film.

Django is a strong political film: with its anti-racist, anti-imperialist, anti-capitalist and perhaps even its anti-American worldview. Though all the European westerns made at the time were clubbed as spaghetti westerns, Corbucci’s films were completely different from Leone westerns. While Leone made his Films more operatic, fantastical and baroque; taking his westerns into the Fellini, Puccini territory. Corbucci took his westerns into the realm of neorealist masters like Rosselini and Pasolini. Django is a perfect example of this. It’s a very down and dirty, ugly looking film; with characters and scenery caked in mud and scenes dripping with blood. The film takes the basic template of Yojimbo; A stranger comes to a ghost town controlled by two rival gangs. He sets up one against the other and ends up eliminating both of them. As opposed to the heroes of Yojimbo and A Fistful of Dollars who were drifters who aimlessly drifted into the town, Django, who is a former union soldier, has a definite personal motive for coming back to the town. His lover was killed by Major Jackson, a former Confederate soldier and a white supremacist who is running his own private war now on the border with his  group of Proto-Klansmen. The other gang that is terrorizing the region is a band of Mexican revolutionaries lead by General Hugo Rodriquez.

Django opens with the title character (Franco Nero), under a dark, gloomy sky, trudging across a dun brown wasteland, towing a coffin behind him It’s an iconic image taken directly from the opening of Yojimbo, where the camera follows tightly behind the lead Ronin. It also immediately sets up a contrast to Leone’s westerns. Leone’s westerns are very harshly lit , with action unfolding in blinding bright light. The hero is not on a horse, though he is carrying his saddles. We don’t know what happened to his horse. The image seems to be a tribute to John Wayne’s introduction in Stagecoach, where we see him with only his gun and his saddles. This ‘cinema cinema’ aspect is one thing common between the two Sergios, where they make references to the traditional Hollywood westerns. The image also sets up a parallel with the image of Christ dragging his cross on his way to his crucifixion. Django emerges like a specter from the middle of nowhere, like a Divine force. The film plays out as a sort of Last temptation of Christ set in the West, with Django as the Christ figure . But he is a godly figure more out of the old testament: a lonely gunman out for revenge, sullen and taciturn; Dressed in all black, covered with dirt and grime, Nero’s performance as Django: vulnerable, angelic and  strangely robotic complements this mythic nature of the character perfectly. We soon realize that he is carrying a machine gun – an instrument of death- in the coffin that he is dragging along. When someone later inquires him about the content of the coffin, he simply says ‘A man named Django is in the Coffin‘.

Django quickly sketches out both its racial and religious politics in the scene immediately post the title sequence; where Confederate and Mexican troops alternately attempt in vain to execute the prostitute Maria (Loredana Nusciak) on the spot for consorting with the enemy. In a scene that’s straight out of Jesus saves woman taken into adultery, Django Rescues Maria by shooting down the soldiers who are planning to burn her on a cross. From that point on Maria becomes Django’s ardent disciple and she follows him wherever he goes. The two of them continue their journey and finally reaches a desolate, mud-choked town with absolutely no inhabitants, except for a group of  overly made up whores and their saloon-owner pimp, Nathaniel (Ángel Álvarez). The only other resident appears to be a hypocritical Bible-thumper called Brother Jonathan (Gino Pernice), Major Jackson’s spy, who would soon have his ear mutilated by the Mexicans and fed to him in shocking act of violence that would inspire a similar scene in Quentin Tarantino’s Reservoir Dogs.. This town; without a name, with nothing in it except for a trunk of a petrified tree that sprawls in front of the saloon and nothing worth fighting for,  as the battleground between the rival gangs represents the dark, nihilistic nature of this film. This is an unapologetically ugly film; ugly locations, ugly sets, ugly people and appallingly ugly violence. There are mutilations, massacres and slaughter. The main antagonist, Major Jackson (Eduardo Fajardo) and his henchmen, are introduced in a scene where they are using Mexican peons for target practice, gunning them down mercilessly as each one is made to run for his life.

No fewer than three wholesale massacres are committed over the course of the film. In the first massacre, Django uses his machine gun to gun down the majority of Major Jackson’s troops.in a confrontation that occurs in the town square. Jackson is spared by Django, but not before he shames Jackson by turning him to a black-face, when Jackson trips and falls in the mud, escaping from the gun fire. The second massacre happens when Django joins up with General Hugo to ambush a fort to steal gold. The stolen gold becomes the moral pivot of the film when the Christ like Django is seduced by its affect. He steals the gold from General and his men and makes of with it accompanied by Maria. But when they reach the rickety wooden bridge suspended above a pit of quicksand, where Django first saved Maria, a quarrel breaks out between the two. Django wants to part ways with   Maria, while María begs him to abandon the gold so they can start a new life together. In the process, Maria’s rifle misfires and the coffin falls into the quicksand below. Django nearly drowns when he tries to recover the gold, and Maria, while trying to save him, is wounded by Hugo’s men, who have caught up with them. Django’s hands are crushed as punishment for being a thief- an act akin to crucifixion. If it was the betrayal of his comrade and disciple Judas for money that led to Jesus’ crucifixion, then  here, it’s  Django’s own betrayal; of his comrades and his self ,as he gets tempted by gold and moves away from his mission of vengeance. This moment perfectly encapsulates both the anti-capitalist and religious viewpoint of the film.

The final massacre happens when General Hugo   and his troops are ambushed by Maj. Jackson on their way to Mexico. Meanwhile , Django somehow makes it to the town with the wounded Maria. He tells Nathaniel to inform Jackson that he will be waiting for him in Tombstone Cemetery. Jackson reaches town and learns about Django’s plight. After killing Nathaniel, he reaches the cemetery to confront Django. This is the the moment of Django’s Christ like resurrection. He rests his gun on the back of his lover Mercedes Zaro’s cross .Believing that Django cannot fire the gun with his mutilated hands; Jackson shoots the corners of Zaro’s cross. Django then kills Jackson and his men by pushing the trigger against the cross and repeatedly pulling back the hammer. His mission accomplished, Django staggers disconsolately back into the hazy distance from which he came from. Though bleak and pessimistic in its worldview, the film ends on an optimistic note in which it is hinted that Django would start a new life with Maria.

Django took the Spaghetti Western to the next level. The stylistic, operatic westerns of Leone was embellished with deeply political and psychological depths by Corbucci, even as he amplified the blood and guts associated with the genre. Apart from Corbucci, other directors like Damiano Damiani also came in to make politically charged westerns like A Bullet for the General. Even Leone seems to have been inspired by Corbucci’s westerns and his later films like Duck you Sucker had a strong political viewpoint. The film made a star out of Franco Nero, who was just 23 years old when he made the film. The film inspired many future directors, including Quentin Tarantino who made Django Unchained (2012),with  Franco Nero in a guest role, as a tribute. 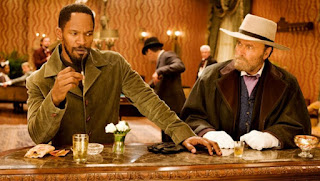