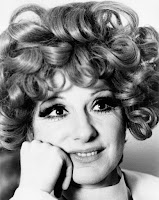 Italian actress of stage, film, TV and voice dubber, Valeria Valeri died in Rome, Italy at the age of 97. The actress was born in Rome on December 8,1921 as Valeria Tulli, she had never stopped working. Along with her theatrical and television career, she also participates in some cinematographic participations, while her career as a voice actress was also very important. She lent her voice to Julie Andrew, Natalie Wood and Anne Bancroft. She was a longtime companion of actor Enrico Maria Salerno from which they had a daughter, actress Chiara Salerno. Valeri was the Italian voice of Emma Valloni in 1965’ “The Tramplers” and Marianna Hill in “El Condor” (1969).
Posted by Tom B. at 7:20 AM