We continue our search for locations for “The Gatling Gun”. Leaving the Grant Ranch that night Chris goes to the graveyard. He’s followed by a gunman and just before he can be shot Wallace shows up and the gunman flees. Chris surprises Wallace and tells him to dig a grave. Meanwhile the gunman rides to town and gathers the rest of the men and they ride back to the graveyard. When Wallace finishes digging the grave they find three coffins. Two are men and one is Miss Treble. One of the men’s bodies has been substituted with another male corpse and Tanner finds a broach pinned to it. Lewis says it didn’t belong to either of the Government agents so it’s a mystery who it is.

Just then the gunmen arrive and a gunfight begins with Chris shooting and killing all but one who escapes. In the gunfire Lewis is badly wounded and Chris leaves taking him to Doc Curtis.

This location is about 3/4 of a mile from the San Pedro de Arlanza monastery between Borgos and Covarrubias. You’ll have to park your car off the side of the road after finding the wooden sign marked Puente de Langstone placed by Tuco Tours. To the right is the river and in this area the cemetery was constructed. 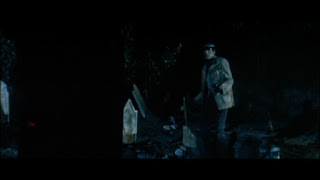