Hi Tom:
Thought I'd report on the swell time had by all at Nitehawk Cinema's showing of GET MEAN on
October 26th.

As you posted earlier, Italo-western icon Tony Anthony and GET MEAN's producer, Ron Schneider, attended. The film's picture and sound restoration by Blue Underground for Blu-ray DVD is just spectacular. The digital transfer was made from the original negative which was stored at Technicolor in Rome, according to Blue Underground's Bill Lustig. He kindly provided a large supply of beautiful GET MEAN promo posters which Tony and Ron were happy to autograph for patrons.

As the Q&A moderator, I was over-prepared with research...which included questions you sent me! The schedule allowed for 15 minutes after the film. What a privilege to share the stage with Tony and Ron. And it was, of course, Tony who the people wanted to hear the most. And they did! I was able to interject questions well enough and we kept it all on time as the auditorium was booked for another movie after GET MEAN. I managed to squeeze in a question about the decisions for hiring composers. It was basically judged on who they felt was best suited. Ron did share a quip when he said, “Stelvio Cipriani was a nice man...but he also had a crush on my wife!”

Once the sagebrush settled and everyone cleared, Tony, Bill and Ron hung around at Nitehawk's upstairs bar. I spent about 20 minutes talking with Tony before having to leave to catch a train home (damn train schedules!). He was as nice as anyone could have hoped and is grateful to Bill, praising him by saying, "If it weren't for that man there, the GET MEAN negative would still be in the lab rotting away. What he's done is incredible. I can't believe it."

But the best part of our conversation was when I mentioned creating Westerns...All'Italiana! in 1983. Tom, I would have bet the farm that he'd never heard of it so I didn't expect a response, but I was so wrong! He said, "You created that? It was you? I can't believe I'm meeting the guy who started Westerns...All'Italiana!." I quickly told him the story of founding it, running it for a couple of years and then my amigo Tom Betts came on board and we ran it together for a time. And for the past 20+ years, you've been the curator/editor. He asked how many copies were sent out when it started. I laughed and said 50! And then he asked if it's still in business. Tom, can you imagine WAI! being perceived as a business? God bless the man! I told him that thanks to you it's still an ongoing franchise and to get online and look it up. The fact that he knew what it was just floored me.

You know something? Had any of the above occurred circa 1983 when WAI! was just beginning and Tony was still active, I would have hit the jackpot in regard to cred for the fanzine. The man is a genre superstar. Back then, I wouldn't have gotten past his agent's assistant!

Joining me at the screening were Eric Mache (he video recorded the Q&A) and his wife; Ally Lamaj and his wife (Ally and Eric, of course, are the brains behind the Wild East Productions DVD label) and Fangoria's Tony Timpone and his wife. I also want to compliment Nitehawk's John Woods who kindly invited me to moderate and for his expertise in organizing the event.

Here's a photograph taken by John of Tony Anthony, me and Ron Schneider. 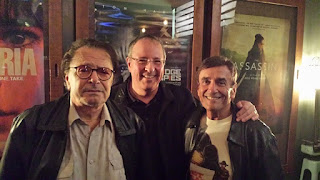