Sergio Leone's spaghetti western sets: The Good, the Not Bad and the Slightly Ugly

The Sydney Morning Herald
By Karl Quinn
July 26, 2015
You may never have heard of it, but you've probably seen Tabernas​. A lot.

It's been in the Indiana Jones movies, in Lawrence of Arabia, in Sexy Beast, in Ridley Scott's biblical epic Exodus: Gods and Kings, even in TV's Doctor Who. But this parched, hilly landscape in Andalusia, the province in southern Spain best known for its Seville oranges and its flamenco music, made its biggest splash in the golden age of the spaghetti western, from the early 1960s to the mid-1970s. Tabernas is Sergio Leone territory. 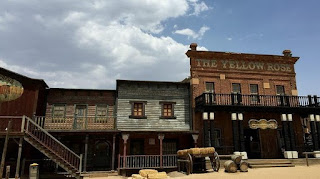 Set on a hillside overlooked by a crumbling Arab fort, the town of Tabernas (population 3646) advertises its heritage as the capital of a once-thriving industry with a huge wooden silhouette on the main drag that's instantly recognisable as Clint Eastwood's Man With No Name, the bottom of his poncho edged by a film strip.

Little wonder it clings to this past. The region is poor, with unemployment around 35 per cent. Many of those who do have jobs – about 100,000 are employed in the so-called "plastic sea", a conglomeration of white-plastic-covered greenhouses that swallows whole towns around the coastal city of Almeria and provides Europe with most of its tomatoes, cucumbers, melons and zucchinis – are illegal immigrants from north Africa working for as little as 20 euros a day (well below the minimum wage).

There are three former spaghetti western sets claiming some connection to Leone and/or Clint Eastwood (and many, many other filmmakers besides) in the Tabernas region, though one of them does its damnedest not to be found. By the end of my day spent touring them, I have come to think of them as the Good, the Not-Bad and the Little-Bit-Ugly of the spaghetti-western-set set. 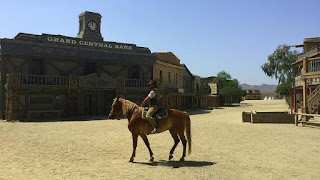 On the highway just outside Tabernas, a cowboy stands by his horse, spruiking the wares of Fort Bravo, aka Texas Hollywood. He looks convincing enough, with his olive skin, perfectly trimmed five o'clock shadow, leather waistcoat and chaps. In another life he might have been in the Village People; here he's a tout.

Directly across the road there's another spruiker, trying to pull business towards Oasys, aka Mini Hollywood. It's a few kilometres down the road, and outside its gates there's another massive billboard pointing back to Fort Bravo. I imagine the touts glaring at each other, muttering "this town ain't big enough for both of us … towns".

We toss a coin and decide to visit Fort Bravo first. We turn off the highway and follow a dusty trail through scrubby desert, pass underneath a railway bridge and emerge in front of a timber fort, with a cluster of teepees in the distances. But these are just the trimmings. The main attraction is a sprawling frontier town that treads a fine line between abandoned and thriving. 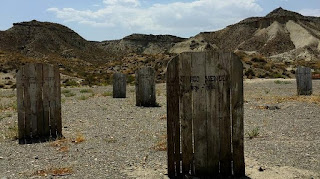 From the outside, the buildings do a credible job of looking like a functioning settlement in some desolate outpost of the American west circa 1853; inside, they're patched together with the most ad-hoc bits of handiwork I've seen outside of my own backyard. "No way would OHS let people shoot here still," I say to my brother-in-law Matt, my travelling companion for the day. Huh. What do I know? In fact, Fort Bravo still hosts the occasional shoot, mostly for TV commercials and magazine spreads.

The place was bought in the late 1970s by a former stuntman, Rafael Molina, reportedly for about $US6000. He's put in accommodation for overnight guests, a swimming pool and … well, that's about it.

We wander around the buildings, mugging for photos in the jailhouse, noting the mattress set up in a pit in the main street to cushion the fall of the cowboy who will at some point in the day be shot while clambering over a roof. 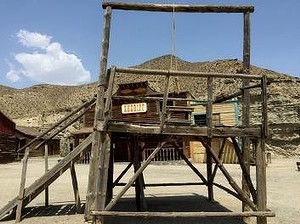 It's seriously hot. Having explored every last inch of this intentionally godforsaken town, Matt and I plop down on a seat outside the saloon, waiting for the 12.30pm show to start. Johnny Cash is blaring over the speakers, confessing that he "shot a man in Reno, just to watch him die". I know how he feels.

The show starts with some can-can dancing from the barmaid (who moments earlier had been taking drink orders for real) and the town prostitutes (I don't even want to know what they were up to). The doors swing open and a pint-sized "Mexican" enters with a saddlebag full of attitude. They swing open again and the hero – the guy we last saw down on the highway touting for business – enters to bring some frontier justice to proceedings.

The next hour unfolds as a mix of familiar macho tics and camp self-parody, all in Spanish. Cards are played, tequila is bought and spat, trust is betrayed and cowboys are shot. I understand a fraction of the dialogue but all of the show. It's a hoot, and the 70 or 80 people in the audience applaud wildly. Sergio would have been proud.

Down the road, Mini Hollywood is an altogether slicker affair. There's a massive parking lot for tour buses and cars, and a zoo and a cactus garden. The town itself – built for Leone's For a Few Dollars More in 1965 (and used for The Good, the Bad and the Ugly the following year) is in perfect condition. The "bank" holds a brilliant collection of cinema projectors (including zoetropes and magic lanterns from the 19th century) and western cinema posters that is almost worth the visit on its own. There's supposed to be a permanent exhibition on the history of the spaghetti western but when we enter the building it's to find a "coming soon" sign and a room that could only feel more neglected if a tumbleweed rolled through it. As with the other places, it does two shows, twice a day. We've come right between performances, though, so have to settle for the sight of an Indian squaw and a cowgirl dousing themselves with water to tame the searing heat.

For all its careful preservation and signs of activity, Mini Hollywood lacks the charm of Fort Bravo. But it does have an extremely helpful German woman at the ticket booth, who points us towards the third former set, known as Western Leone.

We get there just after 3pm. The temperature has hit 44 degrees. The guy on the gate sells us two tickets for 11 euros apiece and tells us the show starts at 5. If we hang around that long, I suspect we'll end up in it because there's precious little sign of either performers or audience. Sorry, but I really don't fancy being dragged behind a horse down Main Street.

The setting is magnificently bleak but the place feels all but abandoned. As we're getting out of the car, someone cranks up the sound system. Ennio Morricone​, of course. We wander around and stumble upon a bizarre truck left over from the third Mad Max film, some of which was apparently shot near here. There's a restaurant offering a three-course set menu for 12 euros; the flies seem to like it, but I don't fancy our chances of surviving unscathed. We stand in the town square, looking at the gallows. "I don't know about you," says Matt. "But I reckon that looks pretty appealing right now."

I think that's a wrap.

The filmmakers came to this part of Spain because it was cheap. It was cheap because the people – like the land – were dirt poor. Fifty years and hundreds of films later, it still is.

They're doing their best in Leone land to make a go of what little they have, and good luck to them. If you're ever in the neighbourhood, I'd urge you to take the spaghetti western trail, to watch a show or two, to splash a few euros around. Lord knows they could do with a few dollars more.
Posted by Tom B. at 5:38 AM