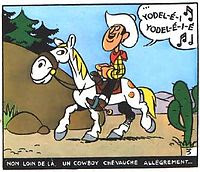 Lucky Luke is a Belgian comic book series created by Belgian cartoonist Maurice De Bevere, better known as Morris, and for a period of time written by René Goscinny. Set in the American Old West, it stars the titular character, Lucky Luke, the cowboy known to "shoot faster than his shadow".

Along with The Adventures of Tintin, Johan and Peewit, The Smurfs and Asterix, Lucky Luke is one of the most popular and best-selling comic-book series in continental Europe. About half of the series' adventures have been translated into English. Lucky Luke comics have also been translated into 23 languages, including many European languages, and even some African and Asian languages.

Both a tribute to the mythic Old West and an affectionate parody, the comics were created by the Belgian artist Morris who drew Lucky Luke from 1946 until his death in 2001. The first Lucky Luke adventure named Arizona 1880 (pictured above) appeared in the Almanach issue of the Franco-Belgian comics magazine Spirou on December 7, 1946. After several years of solitary work on the strip, Morris began a collaboration with René Goscinny who became the series' writer for a period that is considered the golden age of the series. This started with the story Des rails sur la Prairie published on August 25, 1955 in Spirou. Ending a long run of serial publications in Spirou, the series shifted to Goscinny's Pilote magazine in 1967 with the story La Diligence, subsequently leaving publisher Dupuis for Dargaud.

After the death of Goscinny on November 5, 1977, several writers have tried to fill the role of storyteller, including Vicq, Bob de Groot, Jean Léturgie and Lo Hartog Van Banda. In addition to continuing the series, Morris started the related spin-off series Rantanplan in 1987. At the 1993 Angoulême International Comics Festival, Lucky Luke was given an honorary exhibition.

"Lucky Luke's famous cigarette not only identifies a profile but allows the tempo to be modified and extended, expressing a feeling: in Le Pied-tendre (The Tenderfoot), Morris shows Lucky Luke's feelings at the death of a friend in a series of three frames in which the hero rolls and spills a cigarette."

Morris, who had been criticized over Lucky Luke's cigarette for a long time, answered his critics  : "the cigarette is part of the character's profile, just like the pipe of Popeye or Maigret". It is claimed that Morris was forced to remove the cigarettes Lucky Luke smokes from his strip and Lucky Luke who "used to be a heavy smoker", had to give up smoking for "commercial reasons", "apparently to gain access to the American market". 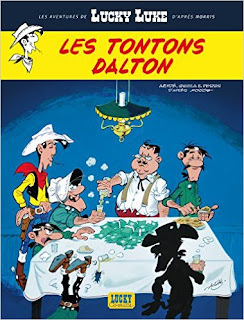 Still in print today the latest issue #81 is pictured above.