Cocco Bill is an Italian comic book character created by Benito Jacovitti. He is the star of a parody Western comic set in hypothetical places in the Far West. Bill is a hot-tempered gunslinger who drinks chamomile tea. Occasionally mocked for this, Bill responds with violence. Despite these outbursts, Cocco Bill is a good guy, and always helps sheriffs to capture criminals. 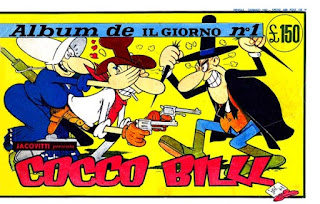 As in most Jacovitti's comics, the pages are full of strange things: all around the places one can find salami (sometimes legged), worms with legs and hats, fish bones (typically close to the artist's signature), as well as horses with only two legs ridden by a man with four legs, and other absurdities. Bill’s first appearance was in Giorno dei Ragazzi #1 (March 28, 1957)

Benito Jacovitti was born Benito Franco Iacovitti  in Termoli, Campobasso, Italy on March 9, 1923 and he dedicated his life to drawing. Cocco Bill was born in March of 1957 and the first strips were published by "Il Vittorioso". Cocco Bill is still drawn and published by "Il Giornalino". Benito Jacovitti died the on December 3, 1997 and his wife Floriana, soon followed him. Jacovitti's work has been reprinted in several languages, including in Rizzoli's famous Bur collection. Throughout his career, Jacovitti created over 60 characters and published more than 150 books, that have influenced many cartoonists, such as the Spanish artist Francisco Ibañez. The great artist is gone but his work will stay alive and still bring joy to our lives. 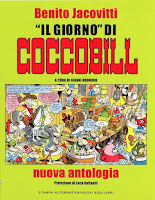 The latest publication of Cocco Bill was an anthology of his adventures with the 2nd volume published and released on October 20, 2009. 357 pages.
Posted by Tom B. at 6:21 AM