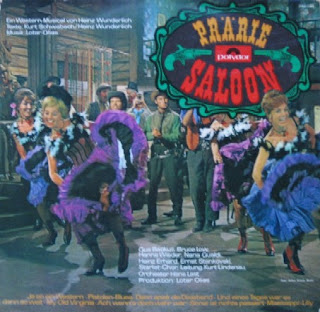 Horse City is firmly in the hands of scoundrels Skip and Butch, they shoot up the town and terrorize its citizens. The old Sheriff Pearson no longer confronts the ruthless bandits. Powerless, he has to watch while brute force takes over Horse City. Worse, however, is the threat of the "killer", the mysterious, yet remained invisible criminal on whose account there is a long series of murders in the area. One evening two strangers enter Mrs. Penny Waters "Prairie-Saloon", the social center of the city. They are Jimmy and his companion Claire, who want to make the acquaintance of the "killer", and learn of his gruesome glory they have learned from the Wild West magazines. Jimmy explains in comic simplicity, he is an academic researcher and gun shooting psychologist. Initially the two greenhorns are only laughed at, but quickly it turns out that behind the innocent façade are two marksmen, who give Skip and his cronies, on the first evening, an efficient lesson. Skip becomes angry, as his girlfriend, the beautiful bar singer Lilli in "Prairie-Saloon", as well as Judy, Mrs. Penny Waters niece, are very fond of Jimmy's boyish gentlemanly manners. When Sheriff Pearson who is on the track of "The Killer", is treacherously killed, Jimmy decides to act. Vigorously he sets out to hunt down the mysterious killer. The true identity of “TheKillers” is revealed and the happy loving couple can celebrate their engagement.

This was a television version of the 1964 German play of the same name. It was televised on German TV on March 3, 1966.