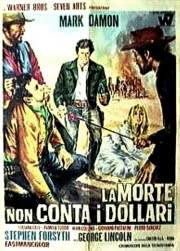 A retired army officer,Major White, is killed in the small western town of Owell Rock but an eye witness has evidence that the murderers were led by Doc Lester,eldest son of a neighbouring family. However while on the way to the judge the witness is caught by Lesters men who force the towns doctor to cut out his tongue.

Fifteen years later the Major's son Lawrence and Lisabeth,the beautiful daughter of Colonel Pearson arrive at Owell Rock having just survived an attack from Lesters men enroute. There savior is a quick draw drifter named Harry Boyd. Lawrence learns from his sister Jane that their father was murdered by the Lesters for his land, and that the murder had been pinned on a Mexican named Rodriguez who has fled. Reluctantly the seemingly cowardly Lawrence pursues getting Judge Warren to re-open the case but the odds are not in his favor as the Lesters now rule the town and Colonel Pearson, the town doctor and sheriff are all murdered. However Harry Boyd is still in town and causing all sorts of problems with Lester's henchmen. The twist here is that Lawrence White is not who he seems to be.
Posted by Tom B. at 6:06 AM