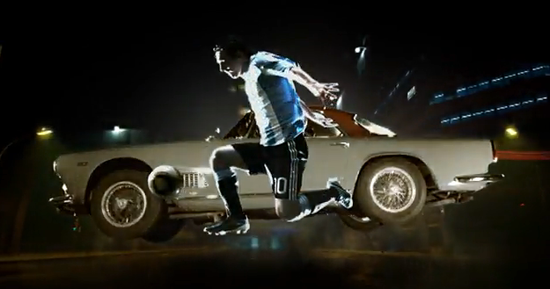 Given how many TV commercials are screened in cinemas, the regularity and extent to which ad agency creatives look to the film world for soundbeds should come as no surprise. One such title that was originally featured in a Hollywood blockbuster and was penned by one of the biggest names in the film score business was recently used for an Adidas (Fast vs Fast) shoe commercial shown during the FIFA World Cup soccer matches.
Providing an eerie counterpoint to the high visual stress levels of sports shoe manufacturer Adidas' Fast Vs Fast clip is Ennio Morricone's 'The Man With The Harmonica' theme, from Sergio Leone's 1968 masterpiece “Once Upon A Time In The West”. This is a re-record rather than the OST version but has benefited the spaghetti western composer's publisher Sony/ATV nonetheless.

Adidas You Tube link: http://www.youtube.com/watch?v=DpyPA-TJzJU
Posted by Tom B. at 6:03 AM