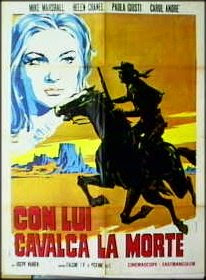 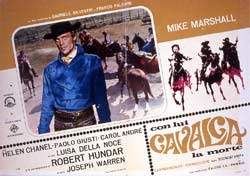 Bobby 'Idaho' Kent works as an agent for the pony express. He's asked to go to Sacramento with proof to indite, Bryan Talbot, a corrupt political candidate for Senator against Stuart Cooper. Talbot hires a group of henchmen led by Kriss to try and keep Idaho from completing his mission. Kent is ambushed but rescued by pioneers from a wagon train. Kriss tries to stop Kent again but he and two of his men are killed. Talbot's wife Dolores now hires her ex-lover Luke Prentiss to stop the messenger. Prentiss tracks Idaho down disarms him, hits him and watches as he falls over a cliff. Thinking he's accomplished his task Prentiss returns to Sacramento only to find Kent has reached Sacramento and is able to keep Talbot from winning the election. In his place Cooper is elected Senator.
Posted by Tom B. at 6:00 AM