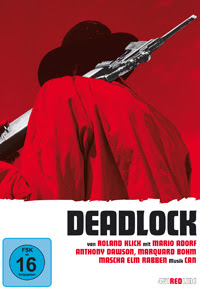 A man called 'Kid' wanders through the desert exhausted, he carries a suitcase. His arm is bleeding from a gunshot. Finally passing out from the heat and blood loss, he lays prone until Charles Dump, a loner living in the shell of an abandoned mining camp, finds him passed out in the middle of nowhere. Dump checks the man's luggage and finds it filled with millions of dollars. Taking the man and the money back to his camp, Charles thinks he might have finally hit it rich.

'Kid', finally wakes-up and warns Charles that Sunshine, the money's owner, will come looking for it. Sure enough, Sunshine comes down on them, hot on the trail of his cash. A game of cat and mouse begins with everyone working for their own purposes. The time for splitting shares long past, only one man can walk away with the suitcase.
Posted by Tom B. at 7:14 AM