After Blonde rescues Tuco from the hangman’s noose a second time he drops Tuco off in the desert and tells him their partnership is dissolved. He tells Tuco that he thinks a man like him can make it back to town  on foot, “It’s only 70 miles.”

If you look closely the noose which is still around Tuco’s neck changes position from being draped around his neck hanging down in front of his head to falling over his left shoulder a second later. 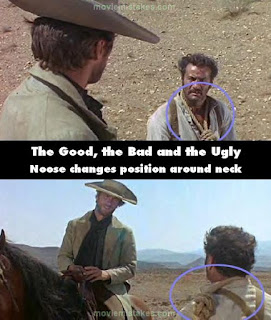