50th Anniversary of A Stranger in Town Premier 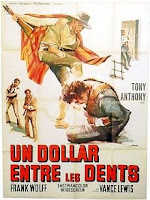 “A Stranger in Town” (Un dollaro tra i denti) an Italian, U.S.A. co-production, directed by Luigi Vanzi as Vance Lewis and starring Tony Anthony and Frank Wolff, premiered in Italy on January 13, 1967. It wouldn’t show up in the U.S.A. until April 24th of that year. The film supposedly budgeted at $250,000 became a box-office smash which resulted in two sequels: “The Stranger Returns” and “The Silent Stranger”. My initial reaction when seeing the film in 1967 was this is a “Fistful of Dollars’ rip-off, but Anthony, who I thought was an Italian actor using an American pseudonym, was no Man With No Name. It wasn’t until I interviewed Tony in the 1990s that I understood what he was trying to do. His “Stranger” was a New York street wise punk who used any means at his disposal to turn the tables on his enemies. His brash boldness got him into scraps he usually couldn’t get out of man to man. Therefore he had to rely on his street smarts to fight off the henchmen and toughs.

In “A Stranger in Town” A stranger dressed like a US Army Captain helps an outlaw named Aguilar rob a large load of gold. When he wants a piece of it for his efforts, Aguilar has him beaten up by his other gang members. After having recovered, he follows the gang to Cerro Gordo. When he tries to get even with them, they outsmart him. Captured, he has to endure torture by Aguilar's mistress, but eventually escapes. He takes out Aguilar's henchman one by one until Aguilar is on his own and the final showdown has come. Using his brains to outwit Aguilar and his Gatling gun he finally comes out on top. 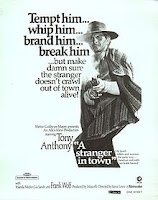 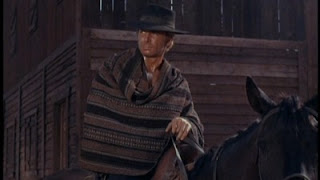