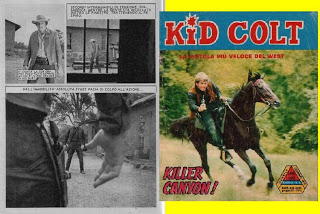 Certainly this was one of the leaders of the Italian Pop Art Comics of the early 1970s, that is, the picture story "Spaghetti Western" KID COLT, published at the beginning of October 1971 by the publishing house C.I.R. Rome (which, also published Two Gun Kid). Fotoromanzi magazines were the rage during the late 1960s and early 1970s. The art incorporated taking film stills and placing them in a magazine format  to tell a story. Some leading such as Loredana Nusciak and Gianni Medici made a lucrative living making fotoromanzi magazines. It was a way for young talent to break into films by making their faces known to the general public and also extra income for character actors and other actors who could not make it in films to continue their careers or make some extra income.

The main peculiarity is that the picture story was not made in Abilene but in the countryside of Lazio, Italy. 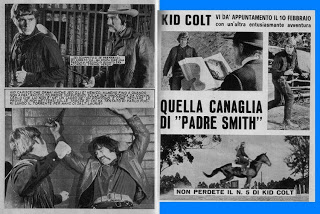