The set at Calahorra, Spain despite all the progress that surrounds it, the solar panels and the wind machines, is still a magical, romantic place that still captivates many cinema goers from all over the world who make pilgrimages to this place in search Leone film locations.

Only a few steps away, on the other side of the tracks, is where the station at which was filmed the scene showing the arrival of Jill McBain (Claudia Cardinale) at Flagstone, a few ruins remain of the town set as a testimony that there was once a great set from Sergio Leone’s “Once Upon a Time in the West” (1968). It was converted into Dallas the following year for “The Price of Power” (1969) by Tonino Valerii, then used as Cheyenne for “My Name is Nobody” (1973) by Tonino Valerii) and then for  Tucumcari for ‘The Genius” (1975) by Damiano Damiani.

Just four buildings are left with their dilapidated brick walls and footings, within the walls of a livestock farm. It’s very sad end to a great set that saw a parade of Leone and Valerii films and such stars as Henry Fonda, Charles Bronson, Claudia Cardinale, Terence Hill and Giuliano Gemma. 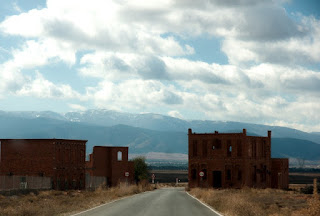