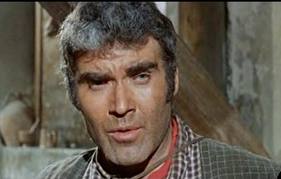 The death of Frank Brana, the Spanish actor who seldom appeared in the credits

The action film specialist, participated in hundreds of films shot in Spain.
DAVID MARTOS 02/13/2012
Francisco Braña Perez was born in Pola de Allande, Asturias, Spain on February 24, 1934, then become 'Frank Brana', the stage name he chose to appear on the big screen with Clint Eastwood and Charlton Heston. However, his name was not in the credits in those colorful yellow letters called 'Spaghetti westerns'. No. He considered his profession, "a job" - was left to the action scenes, fights, and basically the death scenes, were perfect. That was his specialty: 'Death with dignity in the cinema', the title he chose for his autobiography.
In a press release, AISGE [Performers Management Society] reported the death Monday February 13, 2012 at the age 77 Frank Brana, from the mortuary chapel of Carr, in Madrid. He began his professional life in the mines, was excluded from the Army, and ended up working as a driver in Madrid. "I got the opportunity to work as a chauffeur for a man in Madrid. He told me of some screen tests to work in films, as a specialist. They asked if I could ride a horse and I said yes, but not entirely true. .. ", he says in his book.
His first small role, small, was in “Café de Chinitas” (1960). He then went from there to appearing with Charlton Heston and Clint Eastwood and Charlton Heston ... That was a huge step. Frank participated in “King of Kings” (1960) as a Roman soldier with Carmen Sevilla, “A Fistful of Dollars” (1964) “A Few Dollars More” (1965) as Blackie. In the sixties and seventies, Hollywood greats were leaving. One of his last roles, this time with text, was that of Don Luis in “Tiovivo c. 1950” by José Luis Garci. Frank Braña appeared in 59 Euro-westerns over his long career. Sadly the great Spanish character actors we grew to love are passing on. Frank joins the likes of Lorenzo Robledo, Victor Israel, Aldo Sambrell and Antonio Molino Rojo in passing from this mortal earth. Rest in peace Francisco and thank you for the many, many thrilling memories you created over the years.

Spanish interview with Frank Brana at the Almeria Western Film Festival September 2011.
link: http://www.youtube.com/watch?v=o-PeBMnimgE
Posted by Tom B. at 8:00 AM