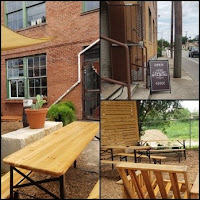 The gatherings will include chef-prepared Italian food, Texas-brewed beer and gunslinger flicks on a big screen.

Movie buffs have long celebrated Spaghetti Westerns for their quirky, low-budget and often hyper-violent take on the American West.

Now, San Antonio's near-downtown Vista Brewing is celebrating the '60s-era film genre with Spaghetti Western Wednesdays, which will include chef-prepared Italian food, Texas-brewed beer and, of course, gunslinger flicks on a big screen.

The taproom — an extension of Vista's Austin-area flagship location — will host chef Matt Garcia of newish Italian sandwich pop-up Gigi’s Deli as he slings “spaghetti like yer mamma used to make — if she was a good cook, of course.”

The pop-ups will take place every Wednesday from 6 p.m. until sellout at the brewery, located within mixed-use artist space Warehouse 5 at 1333 Buena Vista St.

For those not in know, Spaghetti Western films got their name because they were often shot in Europe by Italian filmmakers and dubbed into multiple languages. Since spaghetti was one of Italy's other well-known cultural exports, the name stuck.
Posted by Tom B. at 7:12 AM