Almería Western Film Festival opens registration for its 12th edition, which will take place from September 28 to October 2, 2022 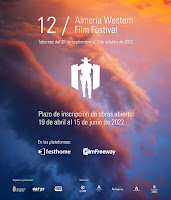 Andalusians who will compete in the new official sections Almeria, April 19, 2022 -. The Almería Western Film Festival (AWFF) opens today the registration of films interested in participating in its 12th edition, which will be held from September 28 to October 2, 2022 in Tabernas and in the western towns Oasys MiniHollywood and Fort Bravo Texas Hollywood . Directors, producers and international, national and Andalusian students will have until June 15 to present their feature films and short films that will compete in the new official sections.

Among the main novelties is the creation of a parallel section of short films called 'Outlaw' and which will collect those national and international works of a more independent nature that navigate on the fringes of the western. Both the works in the Official Section and those belonging to 'Outlaw' will compete for the audience award for the best short film, awarded for the first time in 2022. In addition, the value of the award for Best Cinematography will be increased to 750 euros. RCService.

From now on, the prize for Artistic-Technical Contribution to the Western Genre will be called 'Carlo Simi' in honor of the Italian production and costume designer who worked under the orders of Sergio Leone and Sergio Corbucci during the filming of their works in the Desert of Taverns; and the audience award for Best Western Short Film is incorporated. The organization of the Festival will determine the section in which the selected works will compete after their registration for their subsequent evaluation.

The complete participation rules can be consulted on the Festival website and registration will be carried out exclusively through one of the Festhome and FilmFreeway platforms. AWFF will continue promoting the dissemination and promotion of western or neo-western cinematographic works that contribute to the knowledge of world cinematography. Among its functions, the promotion of international film production in Tabernas and its surroundings stands out, as well as how to promote tourist activity. The Festival will also maintain its tributes to figures from the western genre and world cinematography.

Full-length films of Spanish and foreign nationality produced after January 1, 2021 and may have premiered at other international festivals prior to the 12th edition of AWFF. Its exclusive premiere in Spain and, especially, at the Almería Western Film Festival will be positively valued. This competitive section will have a program of between six and ten feature films.

Films of Spanish and foreign nationality with a maximum duration of 20 minutes that have been released after January 1, 2021. This Official Section will have a program of between ten and twenty professional short films that will be screened during the Festival.

‘Carlo Simi’ Award for the Technical-Artistic Contribution to the Western Genre.

RCservice Award for Best Photography Direction of a Work Spain.