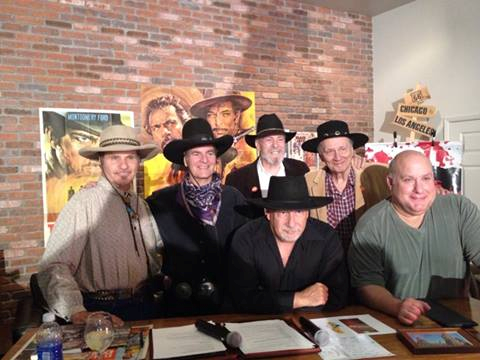 A great lunch and presentation at the Autry Museum yesterday, Robert Woods, Brett Halsey discussed their careers in Italy and Spain making Spaghetti westerns, I was able to talk about Spaghetti westerns and the fanzine WAI!, producer Bill Lustig discussed his love of the genre and releasing some of the best like Django and an upcoming Blu-Ray release of Companeros. Marty Kove finished by telling of his meeting with Sergio Leone at Canne’s and then his audition for “Once Upon a Time in America”.

Thanks to Rob Word for another great MC job and a fun filled luncheon program where even had Spaghetti dinner.

You can catch A Word on Westerns every third Wednesday of the month at the Autry Museum free of charge at 12-2 p.m.
Posted by Tom B. at 6:03 PM