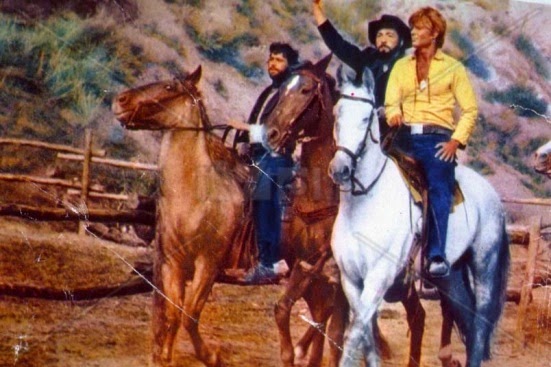 After the Civil War ex-Confederate Aleck Kellaway, a soldier fighting for the South, is tricked by the brothers Clegg and Elliot into helping them to carry out the robbery of a gold cargo belonging to the Northern Army. After an ambush, they are able to get the booty, but Kellaway realizes that the robbery has nothing do with the war. The two brothers wanted only to get their hands on the gold, supported by Kellaway's courage and intrepidity, Afterwards they intended to kill him. Kellaway, quick of mind and of action, succeeds in getting rid of Elliot. Clegg is able to get the upper hand after a struggle and ties Kellaway to the assaulted wagon, which drags him along. Eventually he is able to break free.

In the desert, on the way to his ranch, Kellaway finds a half-breed child buried in a hole. His tribe and his parents were attacked and killed. He takes the child with him.

Twelve years later, Saranda who has grown up together with Deborah, Kellaway's daughter, falls in love with her, but knows that he will never be able to marry her. Many things separate them, race amongst the other things...! Kellaway, who has noticed Saranda’s passion for his daughter, reproaches him angrily. Saranda, humiliated, runs away.

Cedric, son of the Senator who supports Kellaway's election for Mayor, is found by Saranda when Cedric intends to rape Deborah. Saranda beats him pitilessly. Later on, Cedric gets four outlaws to put Saranda out of the way. They go to fetch him at Mrs. Fox's farm, where he works since he fled from Kellaway's ranch. Mrs. Fox, most courageously, faces the outlaws, but they kill her. Saranda finds her dead when he comes back from his work and swears that he will avenge her.

Clegg, who has been in prison, comes back to the village in search of Kellaway, after the fulfillment of his sentence. He takes a room at Hazel's, a woman who knows how to conceal her vicious life by acting as the mistress of a fashion shop. She has excited Kellaway's love to the point that he wants to marry her. Clegg thinks that Kellaway and Saranda feel a deep enmity for each other and asks the latter to join his gang in order that, by abducting Deborah, Kellaway is attracted to a death trap. But Clegg has committed the biggest mistake of his life. Saranda goes into action against Clegg's gang and eliminates all the henchmen one by one. Finally, the two mortal enemies, Clegg and Kellaway, face each other. Saranda knows that Kellaway will succeed in the challenge, but he is ready with his Winchester whilst, by his side, anxiously, Deborah awaits.

YouTube trailer: https://www.youtube.com/watch?v=TeITHKctCyA
Posted by Tom B. at 5:47 AM