Franco Nero and a stellar cast: this is how spaghetti western is reborn 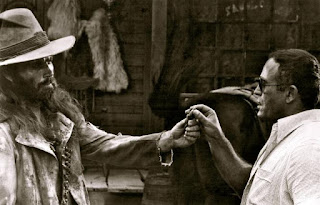 After more than forty years Franco Nero returns to wearing Keoma's dusty cloths and the Italian western rediscovers the ancient splendor. With an international cast full of stars under the orders of Enzo G. Castellari, "The Fourth Horseman" is being pre-produced, a film that marks the re-launch of the partnership between the actor and the director of "That damn armored train »From which Quentin Tarantino was inspired by« Bastardi senza gloria ».

Among the actors who will return to follow the tracks of the half-blood gunslinger Keoma, played by Franco Nero in the historic spaghetti western of 1976 and in a few months in the new production of the German Dreamfilms Gmbh, will be actors of the caliber of Claudia Cardinale, Sho Kosugi, Rutger Hauer, Danny Trejo and Fabio Testi. Next to them a diligence charged with giants of genre cinema and not only as the directors Joe Dante and John Landis and the actors Lou Ferrigno, George Hilton and Gianni Garko.

“A stellar cast as it should be for the great return of the Italian western. And we are waiting for the "yes" of Pierce Brosnan who is busy with another project. We hope that he will be able to participate”, commented Castellari with Il Tempo giving a preview of details and atmospheres of “The Fourth Horseman - Keoma rises”. In the film authentic gems for lovers of the genre, such as the meeting between Nero and Sho Kosugi, legend of Japanese martial arts films. He will interpret an unscrupulous bounty hunter and duel with Keoma as in the cult of American cinema "The Invincible Ninja" of 81. "We will shoot everything in Almeria, like old times. The base will be at Fort Bravo, the western village of Paco Ardura, an icon of Spanish cinema ", explains Castellari, who has only one regret:" That there are no Bud Spencer and Tomas Milian, foreseen in the original idea ".

"The fourth horseman" traces the atmospheres of Keoma but with a more modern and dark key. The gunslinger is called by his old putative father, the Indian chief of the Dakotas, to find a kid from the tribe who was kidnapped. The first scene traces the beginning of the film of 1976 with Keoma that enters a village and meets the Death played by a woman (Claudia Cardinale). Self-quote from which a whole new story unfolds. "The film will be immersed in a leaden and dark atmosphere - the director explains - because the village at the center of the story was built over an Indian cemetery and the spirits of ancient warriors will return to take revenge. Only the kidnapped child, the last of the Dakotas, will be able to end the curse ". A noir-colored spaghetti western, the title of which is a reference to the Apocalypse: in the inn several gunslingers will alternate but only at the end will we find out who the Fourth Cavaliere is, while a telegraph will not stop throwing mysterious messages.

But with what spirit does Castellari embark on this new adventure? “I am making this film to shake up Italian cinema and revive the genre films that have given us prestige in the world. It will be a classic made with innovative methods and the best technology. It will be a film lesson, even from the old glories of genre films between shootings and action scenes. Italian cinema must return to doing things in a big way”.
Posted by Tom B. at 6:48 AM