The hand in the film "White, Red and Verdone" by Carlo Verdone, belongs to Florestan Brega, better known as Mario Brega, actor, thanks to his genuineness which is typically Roman, with a few sentences he immediately became a symbol of the cinema and the Italian costume. Enrico Ruggeri tells his story to ‘The Hawk and The Seagull’, on Radio 24. 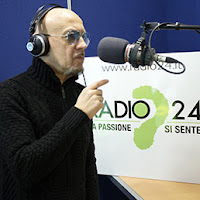 Born in Rome on March 5, 1923, his father was Primo Brega, a carpenter with a passion for athletics, an Italian Olymic champion in the years between 1911 and 1922. Mario grows up in Lazio, assimilating all the nuances that are acquired on the road and learning to gain respect, perhaps pulling some slap. He grows into a man with a powerful physique and a gruff appearance, a man to those in the cinema of the sixties is searching for. And it is precisely because of his appearance and his way of doing things that opens the doors of the cinema for Mario Brega. He appears in four, five films a year. He is always an extra, always dubbed, the gains are not many, but his face becomes well known and Mario became a reliable actor, he is always someone who accepts the roles and directions of the directors without complaining, without issues. Meanwhile in Cinecittà they are chasing a new trend in the wake of the great American western movies. And 'the birth of spaghetti westerns and Mario Brega was called by a director who will mark a turning point in his career: Sergio Leone.

1964 "For a Fistful of Dollars", 1965 "For a Few Dollars More", 1966 "The Good, the Bad and the Ugly": the trilogy of Sergio Leone films, as well as Clint Eastwood as an actor has another fixed actor: Mario Brega, who has become a friend of Sergio Leone and shared with him the adventure of the Spaghetti Western. But the film career of Mario Brega does not stop there, however, because certain characteristics with their excesses, their awkward presence, their ability to take or give slaps, are necessary to the movies more than you might think. Actors who say one, two lines in the whole movie, but who become the most repeated jokes of people, they become part of the cultural fabric of the Italians, always looking for simple, real heroes....

One day Carlo Verdone is at the home of Sergio Leone and the two are talking about a few choices for a movie, when suddenly it happens, a scene that is worth a thousand hearings. A real life scene that Enrico Ruggeri said today in The Hawk and The Seagull, a lucky encounter between Brega and Verdone becomes a way to give the best of themselves, with a leading part that after years of small appearances gives him a just reward for a long apprenticeship: Mario Brega is in fact called upon to play the role of Carlo Verdone’s father in the film "Fun is Beautiful". It will be the beginning of a collaboration that will continue for another three films. Mario Brega back then in fact, was working with Sergio Leone in a film that made history: "Once Upon a Time in America". At his side the great Hollywood stars and among them Robert de Niro who retains a very positive memory of the Roman actor.

After acting in some seventy films, in spite of character and supporting roles he has always played, Mario Brega is remembered by all as a good and kind man.