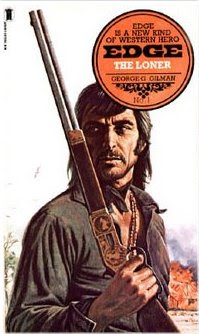 The Edge Series is back! The first book of this popular series of exciting westerns featuring the lone character Edge by George Gilman will be re-released by Solstice Publishing in e-book and paperback in August of 2010.

The British western boom of the 1970’s/1980’s saw a group of writers, collectively known as the Piccadilly Cowboys, producing scores of western novels based very much on the, then popular, spaghetti western genre. The Piccadilly Cowboys consisted of Terry Harknett, Mike Linaker, Angus Wells, Ken Bulmer, Laurence James, John Harvey and Fred Nolan.  Between them they wrote 296 violent and action packed westerns in the 1970's and 80's. Most of these were series westerns, based around a single main character and out of all the series, and there were many, George G. Gilman’s Edge was the most popular.

The Edge books were fresh and a shot in the arm for the jaded western genre - the action on the pages moved at a quick pace, while the vivid descriptions of brutality (which would later spur U.S. publisher Pinnacle to brand them The Most Violent Westerns In Print!) was shocking. However, in an attempt to lessen the impact of the explicit violence -- which Terry readily admits he never enjoyed writing in the books -- he injected dark sarcasm to lighten the situation. The gallows humor, which is prevalent throughout each of the Gilman titles, remains a fan favorite to this day.

Now they will be available again from Solstice Publishing. Each volume will contain an up to date forward from the author himself as well as Solstice Publishing author Gary Dobbs (author The Policeman’s Lot). Gary is also an author of westerns written under the name Jack Martin for British Publisher Robert Hale LTD.

Solstice Publishing, a fast growing ebook and print publisher is proud to launch this series with the first book Edge – The Loner being released in August of 2010. The plans for subsequent releases of the other books in the series are in the works with the anticipation of 2 novels per volume each quarter. Keep a sharp eye out for the popular western series as it is made available again for your enjoyment.

Visit Solstice Publishing at www.solsticepublishing.com to keep up with current events
Posted by Tom B. at 6:48 AM