The Caserta Oliviero signs the soundtrack of a 'spaghetti western'

At the start of the shooting of "Everything for that dirty fur ..." 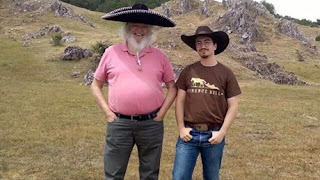 A very specific mission: the reconquest of a territory just as it happened in the west, more precisely that of Camposecco (Camerata Nuova - Rome), the largest and most extensive plateau among the many that are set among the peaks of the Simbruini Mountains Park. Now abandoned by the world of cinema and the 54 western films, shot there, of the 60s and 70s are just a distant memory. The most famous is undoubtedly "They Call Me Trinity" with Bud Spencer, Terence Hill and Remo Capitani.

The latter also known as Ray O 'Connor has always wanted the return of the western in Italy but, albeit with some shorts, has not succeeded in the intent. This project was therefore also born for him, as with the participation of Massimo Capitani (his son), they will pay homage to him. This direct contact with Massimo was born thanks to the administrators of the Facebook group "Camposecco Far West", in particular in the names of Alberto Corridori, Francesco Romano and Vincenzo Pelosi who collaborated during the pre-production phase, as the group was born precisely to re-evaluate Camposecco.

"Everything for that dirty fur..." this is the title of the short film written and starring Gianpaolo Gentile and directed by Daniele Bartoli with Massimo Capitani, Ilaria Fiori and the soundtrack of Francesco Oliviero from Caserta.

Plot: Wyatt, a boy in search of food and money, has a bounty on his head and anyone would like to capture him to collect the reward. He finds hospitality at the home of Stormy (a farmer who lives with his niece Victoria), but his nature will lead him to a very precise choice that will not coincide with the fate of fate.

On 24 and 25 September, Camposecco will once again become a film set to ensure that the west still rides in Italy and that the location can be put at the center of the attention of the film industry as in the golden age.