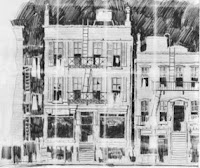 For Sergio Leone, the architect Simi designed his villa at EUR in via Birmania, initially intended for the manufacturer Alberto Grimaldi. For the Neapolitan lawyer Carlo Simi himself had built at EUR, in via dell'Oceano Pacifico, the headquarters of the glorious film company PEA which between the sixties and seventies boasted in its booklet the greatest Italian directors, from Fellini to Pasolini, from Leone himself to Bertolucci. Carlo Simi had joined the Order of Architects of Rome in 1952.

Sergio Leone, who was a friend of Mario Verdone, eminent film critic and father of Carlo Verdone, after having had the young Verdone as a helper, when he made his debut in directing in the first person, once again offered him Simi as set designer: in “Un sacco bello” (1980) and in  “Rosso, bianco and Verdone” (1981). In 1985 we find him grappling with a bizarre film by the Frenchman Jean Yanne, a co-production shot in Rome, where in the Teatro 5 of Cinecittà Simi he reconstructs the palace of Versailles. These are “Liberté, Égalité, Choucroute”, a surreal parody of the revolution in France by Louis XVI and Marie Antoinette (with Michel Serrault and Ursula Andress) that will not even be distributed in our cinemas. 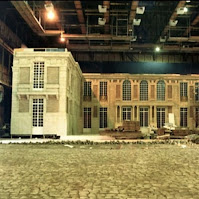 [Above: the reconstruction of the palace by Carlo Simi in a photo courtesy of the architect's family. Below director Jean Yanne on the set with Ursula Andress and Mimi Coutelier.]

In the nineties the meeting with Pupi Avati and the participation in “Bix, a legendary hypothesis” of 1991, completely set and shot in the United States, on the tracks of the jazz player Bix Beiderbecke, who the following year earned him the David di Donatello as best set designer. With Avati we find him in “’Fratelli e sorelle” (1992) and in “La via degli angeli” (1999).

Carlo Simi died in Rome on November 26, 2000 at the age of 76. In 2011 his wife Elisabetta wanted to remember his long career, film and not, with an exhibition organized at the church of the Artists, S. Maria in Montesanto in Piazza del Popolo.

In some films - like “Romolo and Remo” ,  “Texas, Addio”  or “Django” - in the titles he was mentioned as Giancarlo Simi. 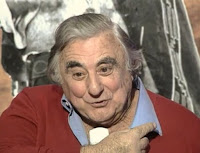 [A smiling close-up of the architect Carlo Simi now advanced in years.] 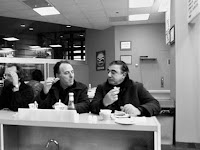 [Carlo Simi with the producer Manolo Bolognini in the United States.]

[Above: opening credits of the 1961 film by S. Corbucci Romolo e Remo , where Giancarlo Simi appears as an interior designer with his full name (later it will simply be Carlo).] 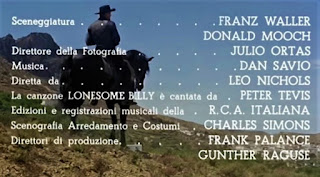 [In 1964 Carlo Simi is Charles Simons in the opening credits, as in this film by Mario Caiano who, in turn, becomes Mike Perkins. The screenplay for The guns do not discuss is by Franz Waller and Donald Mooch (alias Franco Castellano and Giuseppe Moccia). Music and orchestral conducting are by Ennio Morricone who for the occasion splits in the pseudonyms Dan Savio and Leo Nichols.]

[Sergio Leone and the architect Simi during the shooting in Monument Valley, an American trip for “Once Upon a Time in the West”.] 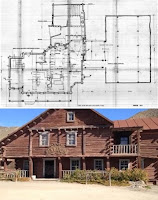 [From the architectural table to the set: Carlo Simi's project for the McBain house in “Once Upon a Time in the West”. His training as an architect is evident in the floor plan (below). The building photographed as it appears today - in the saloon version - restored for the theme park located in Almeria; destination for visitors and tourists who are passionate about the genre and declared fans of Sergio Leone.]